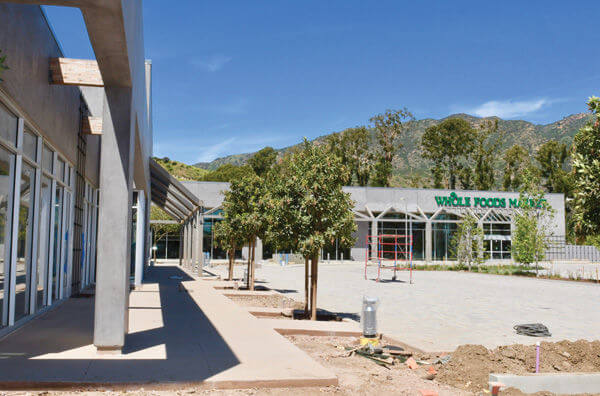 Owner Steve Soboroff personally conducted the tours of the new complex, pointing out his local and community-centered theme for the still-under-construction site.

A shopping center that has been 16 years in the works, according to owner Steve Soboroff, is now just four to five weeks away from opening.

Malibuites got a sneak peek of the new center—known as the Whole Foods Market and the Park project—following a sunset mixer sponsored by the Malibu Chamber of Commerce at Taverna Tony’s restaurant on Thursday evening, May 3. The two walking tours were led by Soboroff himself.

The stunning area of shops, restaurants and parks appears to be as sustainable as any commercial development project can be. There’s not a drop of asphalt, native trees are planted and the sweeping architecture features “living walls” (sometimes called vertical gardens), already filled with green, thriving succulents. The complex offers three parks, including an amphitheater and a playground designed for kids with special needs.

“It’s the most special playground in America,” Soboroff said. “It’s totally wheelchair accessible, designed by a famous playground designer, and the first of its kind not built in a public park. It’s dedicated to our first responders [with a play sheriff’s car, fire truck and lifeguard truck]. There’s not another playground for special needs kids in 20 miles.”

The project was designed to keep the rural feel of Malibu—there will a porch with Adirondack chairs and rocking chairs near the playground so parents can relax while they watch the kids play. Tables will also be placed where chess and checkers can be set up along with features such as outdoor dining options, both front and back doors for many of the businesses, and special programs at the amphitheater put on by the tenant partners.

Soboroff’s goal was to create a community space where the residents of Malibu could feel at home—and it appears he has succeeded so far. He recruited as many retail shop and restaurant owners who already live in Malibu as possible—including Howdy Kabrins, Joe D’Amore and Lenise Soren.

“You already know our tenants,” Soboroff told the crowd gathered on Thursday. “They’re your friends and my friends.”

There aren’t any Rodeo Drive-esque shops or chain retail clothing stores in this center. All of the shops, services and restaurants that have signed leases so far serve as more practical additions to the local community.

Soboroff said there are only three spaces left in the complex, making it 93 percent leased. All of the retail spaces have very high ceilings and larger than usual frontage onto the shopping center.

As for driving access and parking, two separate driving entrances and additional parking behind the Whole Foods Market were created. Soboroff said employees will not be allowed to park in the lot.

The tour group was allowed to peek inside the windows of the future Whole Foods Market, which looked to be nearly complete with rows and rows of merchandise shelves and checkout counters already installed.

A new restaurant, The Real Coconut—based on the original restaurant in Tulum, Mexico—will serve three meals a day of healthy Mexican food and wellness drinks.

Salvatore Sampino, practice manager for Malibu Eye Center Optometry, said they have also signed a lease. “We’ve been looking for a second location for quite awhile.

In addition, Soboroff confirmed that an ice cream shop, a nail salon and a hair salon have signed on, but didn’t share their names.

“I believe Malibu is a resilient community, but it’s going through a mourning process,” Soboroff said. “I hope [the Whole Foods Market and Park] plays a role in the recovery process and will serve as a reminder of how wonderful the community can be.”

He later added, “This is the future of your community—you’re not going to see anything as community-oriented and community caring, and I hope it symbolizes a good future and a good time for all of us.”