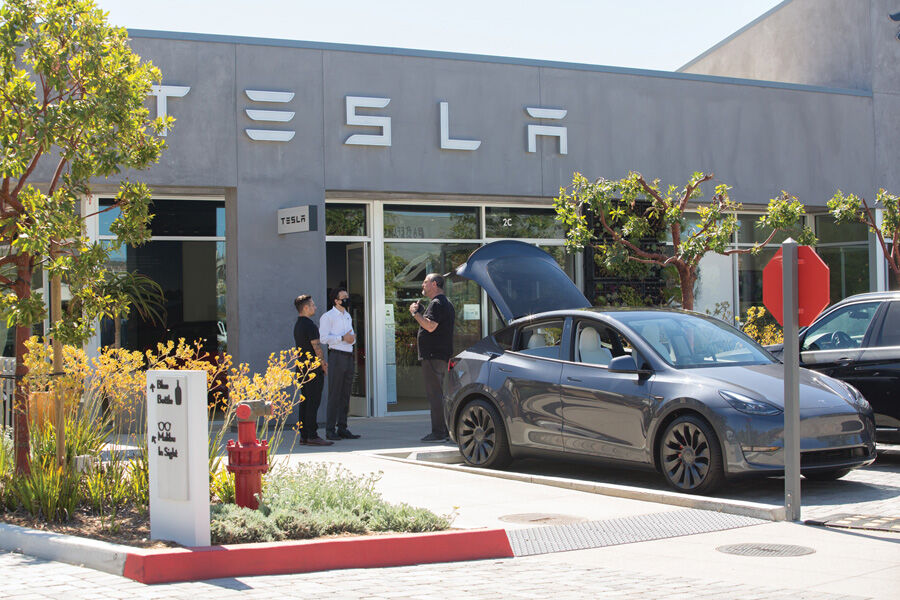 “I don’t call it a Tesla store. I call it an off-the-grid museum, basically ... and if Malibu isn’t the place that’s trying to get off the grid, then I don’t know what is. I think it’s a perfect fit for the Malibu I know.” The showroom also exists to help people learn how to make the leap.

“Getting off the grid is a big step,” Soboroff said. “I felt, and so did [Tesla], that this is the perfect place for Tesla to build an information center-slash-showroom—all showing people how to get off the grid.”

To be clear, the Tesla store is strictly a showroom. Vehicles are on display only. Salespeople can help customers order a car and guide them through the process of choosing what items they want included or set up test drives, though cars can also be purchased online. There is no service center attached to the store. Once a car is ordered, it often takes a few months to receive.

“It’s just cool,” the real estate developer enthused of the new store. “So many people in Malibu were affected by the fires and are rebuilding homes.”

It just so happened that right before the store officially opened, Soboroff was there to make its first sale. Ken Fuchs of Hidden Hills was visiting the shopping center’s playground with his wife and young daughter when he noticed the new showroom. Already a Tesla driver for a few years, he wanted another car— “I couldn’t get enough of it”—but the store wasn’t officially open for business.

“The door was locked,” he recalled. Fuchs, who is a successful television director of “Shark Tank” and “The Bachelor,” fortuitously ran into Soboroff, thinking the real estate developer worked there. Soboroff arranged for Fuchs to enter the store and become the Malibu location’s first customer, making a reservation for a new car to be delivered in June.

The real estate mogul was mistaken again at the shopping center as he was picking up trash—a “pet peeve” of his. He relayed this amusing story: “The other day when I was walking around there in the back area I noticed an empty bottle of Gatorade on the sidewalk.” He found a Coke can nearby as well. As he picked both up to throw away, a woman approached him with two more cans. “She says, ‘Here you go. It’s 20 cents.’” Apparently, the woman mistook the successful businessman for someone seeking the California Redemption Value (CRV) change. A final irony—both Soboroff and the unnamed woman were presumably unaware that it’s nearly impossible to collect CRV tax money in Malibu, as no redemption machines currently exist in the city and Whole Foods only accepts bottles and cans purchased from its store.

In Touch With Nature