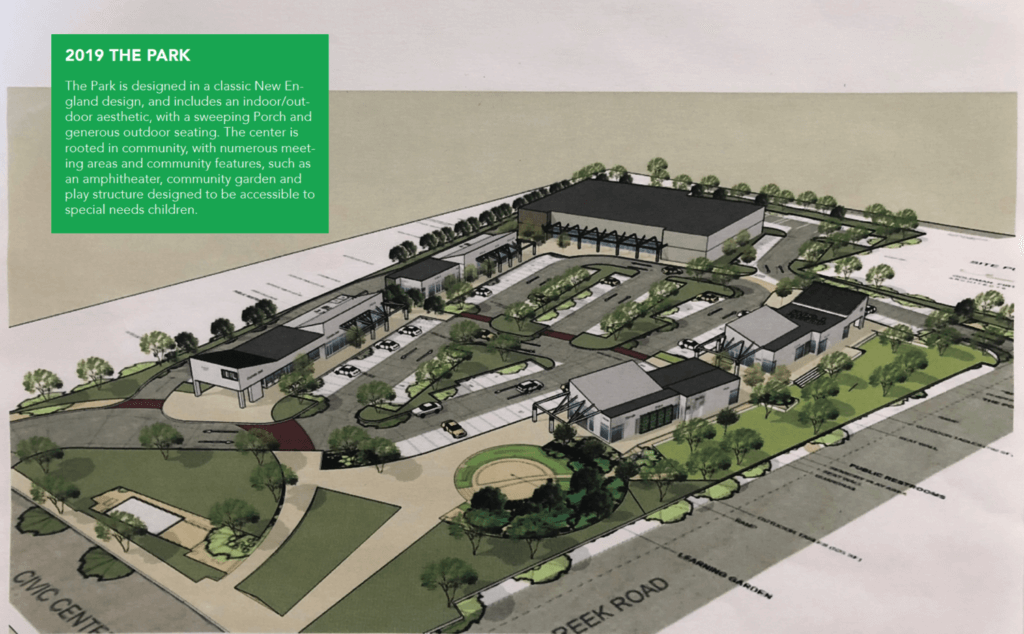 Steve Soboroff's latest venture, named The Park, will bring retail and dining options as well as a slew of community features to the Civic Center area when it opens in 2019.

When the Malibu Lumber Yard officially opened in May of 2009, replete with a Kitson, a trendy cupcake shop and a glitzy, celebrity-filled opening night party, to many Malibu residents the event marked something of a culminating event in the years-long shift of their city’s identity. If Malibu wasn’t exactly the bucolic beach town of decades past, for years it had still managed to maintain something of the modest, neighborhood-y feel for which it had long been known, its commercial strips still dotted with the trappings of friendly suburbia; a Radio Shack, a book store, a locally-owned dance studio.

However, by 2009, rising rents and a spate of new openings were beginning to change the makeup of downtown Malibu. When Ben & Jerry’s closed up shop, the luxury Italian clothing brand Missoni quickly snapped up the space. International behemoths like Ralph Lauren and True Religion were soon to follow. By 2009 the moniker “Rodeo by the Sea” had begun to emerge, a cringe worthy but increasingly apt distillation of not just the burgeoning crisis of identity posed by these shifts in the retail market, but one of convenience as well. If you live in Beverly Hills and your local hardware store closes, you can drive 5 minutes to another one. But what of a small town, at least 25 minutes from any other, where there’s pretty much only one of any store?

“I told the clerk in Calabasas she really should come and see what Malibu has become,” Malibu resident Dick Van Dyke lamented in a 2008 Malibu Timeseditorial, detailing the commute now necessary to procure a new screwdriver or pair of underwear. “I did remind her to come early as parking space is at a premium on the weekend.”

For the most part, however, the new breed of luxury chain retailers that descended upon Malibu weren’t to last long. Stores like Missoni and True Religion were soon vacant, turnover rates climbed, and by 2009, 8 percent of retail space in Malibu was vacant, the first time in a decade the rate had exceeded 3 percent.

And while the market has seen an upswing in recent years, with lower vacancy rates and more local and small businesses opening up shop in the city, hastened by a 2014 City Council ordinance limiting the number of chain companies, retail in Malibu has never reclaimed the diversity of inventory and services it once boasted. In 2018, the city still largely lacks the kinds of stores where you can buy a screwdriver, or some underwear.

Now, Steve Soboroff wants to change that. At 69, the developer has spent nearly half his life involved in Malibu real estate. He remembers well the kinds of stores that used to populate Malibu’s downtown; the pet store and the Radio Shack. The Pizza Hut that managed always to feel both gloomy and charming in equal measure. Indeed, he’s the reason many of these stores ended up in Malibu in the first place. In 1988, Soboroff purchased Malibu Creek Plaza (now Malibu Village), bringing in a diverse range of retail and service-oriented retail tenants, from Crown Brooks to Radio Shack.

“[Stores] went in by popular demand of the community,” he said of the old Malibu Creek Plaza. “We were able to create a real sense of place that started with great local tenants. Today, the world has changed, but our way of doing business hasn’t.” Soboroff, along with his partner Michael Heslov, is now making a triumphant return to Malibu to prove his point. Not only does he think there’s still a huge market in Malibu for service-oriented retail; he’s betting millions on it.

Enter The Park, Soboroff’s latest, much-anticipated and equally contentious new project currently under construction in the Civic Center area, which will bring 14,000 square feet of retail and dining, a Whole Foods market and extensive park grounds to Malibu’s downtown when it opens in May of 2019.

The Park project will feature expansive outdoor seating, with comfy Adirondack chairs and a sweeping Porch Designed to be a park first and foremost, the landscaped grounds area will include an orchard and a community garden from non-profit Big Green, which will provide programming for local students.

“Our vision was this open space of park and landscaping that served the community from a service perspective,” says Soboroff of the new project. Community is at the heart of the Park, Soboroff said, with construction to include a slew of meeting areas and features such as a community garden, playground and amphitheater. And an important part of fulfilling that community-centric ideal, Soboroff says, involves providing the diversity of retail that has been noticeably lacking in Malibu in recent years. “We’re trying to provide services that [Malibu residents] today are driving to,” he said. “Instead, we want them to [be able to] walk here, drive a golf cart here, [ride] their horse here. It’s about [shopping where you live]. God forbid people who live in Malibu shop in Malibu.”

“I guarantee you’re not going to see stores from Rodeo Drive,” said Cindy McAfee, a partner at Soboroff & Partners, who managed the Malibu Creek Plaza center for years, and will serve as a property manager for the Park project. “But that’s what people think,” Soboroff said.

Indeed, while Soboroff has been out of the Malibu real estate game for years, he’s certainly not naïve to the shifts in retail during that time, nor the toll the rollercoaster market has taken on the community. Fears that the new Park development would further corrode Malibu’s small town character, bringing yet more chains while displacing mom and pops and more necessary stores, stoked considerable community opposition towards the project since its inception. The debate came to a head when Malibu voters passed a local measure in 2014, putting limits on chain stores and requiring any large commercial development to go to a citywide vote for approval.

Directly aimed at halting the Park project, Measure R was ultimately ruled unconstitutional 2015, and in October of last year, the project finally broke ground. With construction now in full swing, however, Soboroff is looking towards the future. If the opposition to the Park project didn’t necessarily surprise him it struck him as misplaced, he said, and he’s excited for Malibu-ites to see the kinds of stores he’s hoping to bring to their community. While he wouldn’t disclose specific tenants he’s in negotiations with, he said that rent prices would be “very reasonable” in one of the approximately 12-13 stores, and that he was looking to bring a diverse mix of stores to the project.

“We brought the Radio Shack in, Malibu’s first book store, the pet store, versus the thinking of let’s drive up and down Rodeo Drive and pick out more stores,” he said. “What we’re saying is we’re going to continue with that kind of thinking in the merchandising of [the Park].”

Which is not to say Soboroff’s new project will look anything like his past developments, or any in Malibu thus far. Conceptualized as a “park that has a Whole Foods and some very small shops [in it]”, the project will operate essentially as a community park first and foremost, with heavily landscaped areas conceptualized by local firm Valley Crest Landscaping, including an orchard of 80 California sycamores. The property will also boast a slew of community services and centers, including a community garden where non-profit Big Green will host a variety of programming for local students, a sensory garden, an amphitheater, and a first responders-themed playground from nonprofit Shane’s Inspiration, which constructs play structures that are accessible for special needs children.

Fostering community is also at the heart of the shopping center’s actual design, said Soboroff. Inspired by an East Coast, beach cottage aesthetic, the Park will feature generous outdoor seating, including a sweeping, Adirondack Chair-spotted porch in the style of classic New England beach towns like Martha’s Vineyard, 9,000 square feet of retail, and one large anchor restaurant and a smaller casual eating option.

The Ranch will comprise extensive retail, dining and office space, as well as a playground and landscaping. Bryan Gordon, CEO of Pacific Equity Properties, said community was integral in the new center’s design. “Our vision is to create a local gathering spot where people can work, meet, hang out, and socialize,” he said.

“[The Park] is really going to add exactly what we’re looking for in that it will [have] more of an old-fashioned, hometown feeling away from the strip malls,” said Barbara Bruderlin, CEO of the Malibu Chamber of Commerce. “With its built-in programming [and spaces], its going to be a real gathering place for the local community.” And the Park isn’t the only Malibu shopping center to embrace this “hometown” community-centric approach to retail, Bruderlin said. As bricks-and-mortar stores work to adapt to an increasingly digital shopping world, storeowners are increasingly repurposing their retail spaces as destinations, Bruderlin said. Malibu pop-ups now host community events and fashion grander displays, while developments are operating as community spaces as much as retail ones. “Retail is a venue for meeting and greeting and having personal experiences,” she said. “You’re paying not just for [an item] sometimes, but for the whole experience of going someplace fabulous and getting it. As we deliver those kinds of venues, we’re going to draw more people into wanting to go out shopping.”

Developers of the Malibu Ranch, a 112,000 square foot retail, dining and office space property currently under construction at Civic Center Way, just left of the Park construction site, say, similarly to Soboroff that treating their new space as a community center was an essential component of the project. “Our vision is to create a local gathering spot where people can work, meet, hang out, and socialize, as well as a place where families can bring their children,” said Bryan Gordon, CEO of Pacific Equity Properties, Inc., the developer behind the Malibu Ranch. “As opposed to solely focusing on the shopping experience of the center, we have put an emphasis on the communal aspect of the development.” The project will bring approximately 25-40 retail/dining spaces to the Civic Center area, as well as 42,000 square feet of office space and considerable open spaces, such as a playground. “[Our aim is] to create a rural village atmosphere,” said Gordon.

So with the new Malibu’s downtown slated to change immensely over the next few years, the city awaits a shakeup of the retail market once more, albeit, perhaps, with a bit more optimism this time. The promise of more diverse stores and a focus on community space has many business owners excited, Bruderlin said. Diana Day, who has owned the women’s clothing store Encore in Malibu for upwards of 30 years, is one of them. She says its high time Malibu shoppers can buy a greater range of items than what is available at her store. “That’s how you draw people in, is to have something other then women’s clothing stores,” said Day. “It makes more sense.” MM