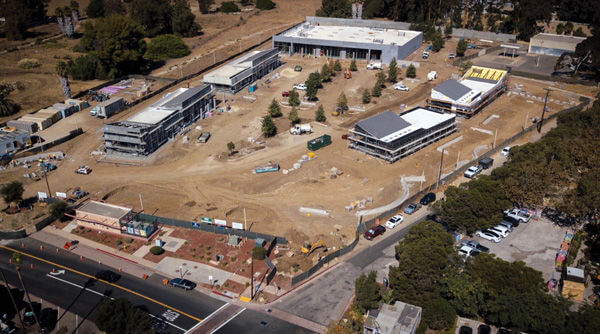 It’s been a long time coming—more than five years in the works—but investor/developer Steve Soboroff was finally ready to go public with the announcement that the still-under-construction Whole Foods in the Park shopping center at the corner of Cross Creek Road and Civic Center Way is 87 percent leased. What he described as the center’s “coming out party” was held last week at the Malibu Chamber of Commerce sunset mixer at Duke’s Restaurant.

In an interview with The Malibu Times, Soboroff said he was looking forward to sharing the center with the community.

“Everybody’s been waiting for this,” the developer said. “My theme tonight is about the people in the neighborhood and those operating the small businesses. Like ‘Mr. Rogers’ Neighborhood,’ these are the people providing the goods and services in your neighborhood.”

When asked when the center would open, he estimated the end of April or beginning of May 2019. He explained that construction came to a standstill during the fire evacuation because the workers had no way to get in, so it was behind schedule.

Soboroff sees the timing of the center’s opening as symbolic, representing a reintroduction of the community and its resolve to move on after the fire.

“I think it’ll be received as a positive thing,” he said. “It’s the first new shopping center in Malibu in 35 years, and maybe it can help with the losses and processes everyone is going through. We are ‘Malibu Strong’ and Malibu resilient, and we always come back, and this will be a nice thing to help.”

Only the first six tenants were officially named at the party—management is holding back the names of the other until a future event—but those businesses are as follows:

• D’Amore’s Restaurant—Most locals are familiar with D’Amore’s Pizza, since founder Joe D’Amore and his wife Christiana live in Malibu and have two locations here. But his entry at the Whole Foods Center will be their first-ever full service restaurant, as opposed to mainly pizza.

• Howdy’s Restaurant—Well-known local Howdy Kabrins and his wife Linda have decided to go into the restaurant business once again in Malibu, and have chosen the Whole Foods Center as their location.

• Barefoot Dreams—Barefoot Dreams is owned by Malibu resident Stan Cook. The Dreams collection consists of soft blankets and throws, newborn and toddler wear, accessories and adult apparel. The Barefoot Dreams brand is sold all over the world, according to Cook, and he’s decided to put his first-ever brick and mortar flagship retail location in at Whole Foods and  the Park.

• Blue Bottle Coffee Café—This specialty coffee roaster company is 15 years old and hand-picks all of their coffee farmers. They are currently located in six U.S. cities and also have a mail order business.

Leasing agent Jay Luchs told the crowd, “We’ve all witnessed a changing environment in retail with Amazon, and the passing of more laws to regulate restaurants. But we feel this is an incredible location with small spaces that people can afford.”

Soboroff described the retail spaces as being intentionally small—500 to 1,000 square feet with high ceilings.

“They all face Whole Foods and they are all less than a one-minute walk from Whole Foods—beautifully designed for retailers,” he said.

One of the co-owners of Door-to-Door Cleaners, Sajid Veera, told TMT he and his brother almost decided to pull out after the fire, “but Steve is so passionate in making this successful that we decided to stick to it. The fire made us nervous, but then we started doing a lot of fire restoration work here in Malibu with furnishings and drapes, and have gotten to know a lot of people.”

Veera is also impressed by the fact that Soboroff is building a play area for special needs children in the park. “I have a son with special needs, and that resonates with me personally,” he said.