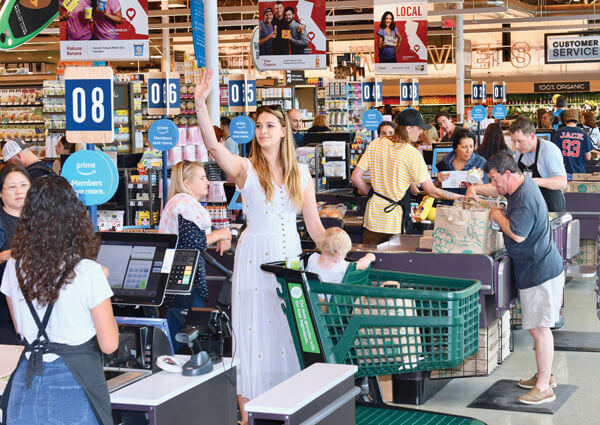 Whole Foods Opens With a Splash in Malibu

Even though Malibu residents voted to reject it in 2014, hundreds lined up Wednesday morning with the promise of a free goodie bag for the first 300 to enter the new Whole Foods Market. After 13 years of planning, voting, court decisions and then construction, the healthy lifestyle grocer finally opened to the public on the site of the old Papa Jack’s skatepark in the Malibu Civic Center.

Santa Monica resident Kathleen Scott didn’t let an 8 a.m. lineup time keep her away from the grand opening festivities. She was one of the first in a long line to be treated to free food and drink samples. Scott said she knew there had been opposition to the new market but said she had a “good feeling about it and, at the end of the day, people will change their minds.”

Malibu voters spoke in 2014 with the passage of Measure R that was intended to limit suburban sprawl and commercial chain stores. Measure R was ruled invalid in 2015, giving developer Steve Soboroff the go-ahead to construct the 25,000-square-foot store along with an additional 14,000 square feet for restaurants and retail.

Soboroff beamed Wednesday morning about the public’s enthusiasm for the new development, commenting that in a preopening the prior Saturday, “the number of people that came was double what was expected. The community loved it. The playground, the porch, the rocking chairs were full. People were saying the landscaping and trees looked like they’ve been here for 15 years. It’s way beyond my expectations.”

The Malibu Times questioned the developer about social media and online chatter from locals grumbling about opening the store before some “living walls” were completely landscaped.

“I think they wanted all the vines to be mature before we open, but that’s up to God,” he continued. “It ain’t up to the planning commission.  It takes 18 months for vines to grow so we weren’t going to wait 18 months. The grumblers are haters. There’s two or three of them and they’re irrelevant to me. I want people to come and enjoy.”

With a few hundred people anxiously awaiting the 9 a.m. opening, Whole Foods officials decided to open 15 minutes early with grand fanfare and music playing. Once inside, dozens of new employees greeted first-time customers with loud cheers and waves of applause that lasted a full quarter-of-an-hour.

With new employment, those 140 full- and part-timers were happy to greet the community that will be supporting them. A Whole Foods spokesperson mentioned that, just prior to opening, the crew members took part in a Whole Foods tradition—a bread-breaking ceremony for employees only for bonding and as a symbolic gesture of good luck.

One local customer who asked to remain anonymous remarked, “When was the last time you’ve seen anything like this (referring to the boisterous employee greeting)? They’re gonna kill it here. Look at all the jobs they’ve created.”

Calling herself a “serious advocate,” Malibu resident Lynne Daniels said, “I always wanted a Whole Foods here. It’s an asset to our community and to bring up the real estate market.  This is a happy joyous time that could bring all of Malibu’s energy back to the way it was.” The 30-year resident commented, “It’s positive, we all have something new to enjoy in Malibu.”

As for parking, Soboroff said, “Bring your golf carts here and horses. (There’s a hitching post.) It’s important to me. Bicycles—everything but skateboards. Skateboards are dangerous here.” A final epitaph for Papa Jack’s, Malibu’s only skate park, shuttered by Soboroff in 2011, is a pledge of $25,000 toward its relocation.

The Dish: Filling Breakfast Selection at New Whole Foods Market
All Posts
The Whole Foods Plaza: When Commercial Development Gets It Right